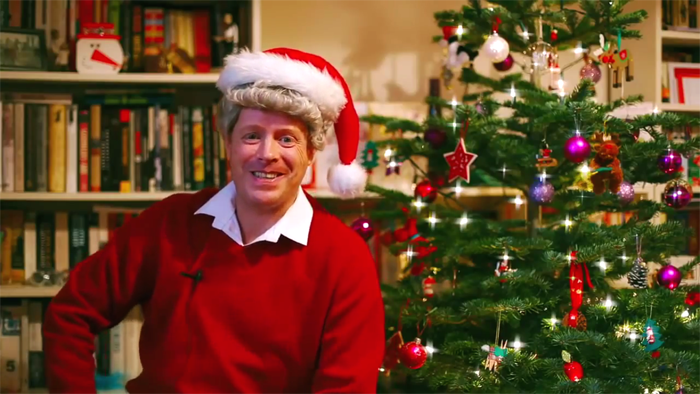 Head of football intelligence Tash McDermott provides an alternative Christmas speech. Tash talks about the situation regarding Steve Kean at Blackburn Rovers, the positive comments from "the village", Robbie Savage and the Match of the Day pundits, the arrest of Father Christmas, Blackburn Rovers down and up strategy, possible contenders for the Blackburn job, Venkys Christmas presents to the staff of BRFC, the FIFA chairman, being afraid at Christmas, Tash's forthcoming film Tash Force in 2012 and how madness isn't a laughing matter.

Important statement: For a start I'll say my spellcheck isn't working on this computer. My brother who is an IT technician was supposed to come round for Christmas drinks but he's shacked up with some bird who works at Waitrose so bear with me. I'm not one for paperwork.

I'm distressed and appauled to wake up on Christmas Eve morning to discover that I'm part of a spear campaign on BRFCS forum. Not content with targeting poor Steve, just like Messrs Roberts, Anderson and Dunn I find myself also targetted by the rebellious scum. Earlier today the following message was posted on the aforementioned hooligan forum.


Earwiggy said:
Tash isn't a member but he does have a read, he actually prefers Burnley the nugget
Click to expand...

Regarding the above slander. I would like to state that I do not, repeat, do not prefer Burnley. Sure they have better pies and in my capacity as a football intelligence official I have reluctantly had to partake in activities at Turf Moor, including attending games when Rovers are away.

Okay on one of those occasions I did wear a home shirt but again, sometimes these things are expected when you are an "undercover" police operative. I would also point out that later on I displayed my distaste for the situation by vomiting on the main concourse, along with the claret and blue shirt I was wearing, and the two suicide squad members I was sitting with. Fair enough this may have been because of the six pints of lager I consumed, but nonetheless it reflected my personal views.

The fact that I share a dislike of Ewan Coyle with Burnley fans has nothing to do with it either. I just don't like the look of him. As a child I was also afraid of clowns, freaks and monkeys (the animal not the band). Judge me for a lack of understanding, but do not judge me as a Burnley fan.

I suspect "Earwiggy" is the man who I've had several legal entanglements with over the past six months. As you will see in my forthcoming film he tried to do me up like a kipper. Yes, he's the guy who tried to stitch me up in the forthcoming Tash Force documentary. So it seems that there's some sour grapes afoot here. Give it a rest son.


Ste B said:
The 2 videos so far have been absolutely superb. I'd love Savage to see this one !!
Click to expand...

BiggusLaddus said:
Brilliant!
Please someone pass this on to Sav.
Click to expand...

As for Robbie Savage, please do pass the Christmas message on. He will of course tell you he has no recollection of me. Typical. The amount of times I've been round at his caravan for a cup of tea I can count on seventeen fingers (that is to say I went round seventeen times, again I'm not a Burnley fan). All I'll say is the man is prone to telling untruths. Even worse he left me out of his biography the lousy bastard. A shame really as we were best buddies at one point, some would say like brothers.

Anyway I won't wallow in the past, it's Christmas day and as they say what doesn't kill you only makes you stronger. Although I'm loathe to admit that my friendship with Robbie Savage also led to the destruction of my marriage. So that saying isn't completely true, as it also led to divorce and a course of anti-depressants.

I will elaborate further in a future internet video blog. Have a smashing Christmas and as George Michael would say...Club Tropicana, drinks are free.